The reliability of connectors

Reliability is a term that is commonly used in our daily lives. Some cars are sought after for their high reliability; others are avoided for the opposite reason. Reliability is an expectation people have of their friends, bosses, and salaries, but its exact meaning may vary depending on the situation.

However, when it comes to electrical connectors, there is a precise definition of reliability. In simple terms. Reliability is “the probability that a connector will perform as required for a given period of time and under a given environmental and/or mechanical stress”.

This definition indicates that there is a defined set of performance levels that must be maintained over a defined period of time when the connector is operating under defined conditions. Since any or all of these will vary with the application, the reliability specification of a connector is a function of all three.

• What is a connector? Construction Basics

So, what exactly is a connector? The general definition of a connector is that it “provides a separable connection between two elements of an electronic system without unacceptable signal distortion or power loss”.

The two key components of this definition are “separable” and “unacceptable” performance loss, both of which depend on the application of the connector and its electrical and environmental requirements.

Below is a simplified diagram of a connector showing the main components as well as a close-up of the contact surface and interface.

If nothing ever failed, connector reliability would be a non-issue. When looking at what can go wrong in a connector, though, we can distinguish between failure modes and failure mechanisms. A failure mode is the particular way that the connector could fail functionally compared to the application requirements—for example, contact resistance that exceeds the specification or unacceptably high insertion force are both failure modes. A failure mechanism is a cause of a failure mode—for example, mechanical vibration and electrical overstress are both mechanisms that may lead to failure.

Here are some common failure mechanisms and their typical failure modes: 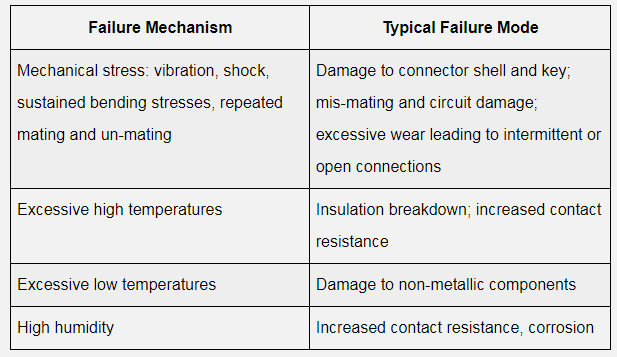 How do we develop reliability metrics for connectors? In most fields, reliability is determined using one of three available methods:

1. Actual use: monitors the performance of the product in service.

2. Predictive: predicts the reliability based on a model developed through empirical studies and/or testing.

For a number of reasons, though, these techniques are not suitable for connectors. Standard statistical metrics such as MTTF and MTBF (Mean Time To Failure and Mean Time Between Failures, respectively) are difficult to obtain. Instead, connector manufacturers give a set of guaranteed electrical and mechanical operating specifications and a set of qualification tests that sample products have passed.